A great report from America 2050 (via INFRASTRUCTURIST) lays out the case for high-speed rail. The interesting part is how they explicitly call out and use mega regions as part of their analysis. They also include this map, which shows the current mega-regions: 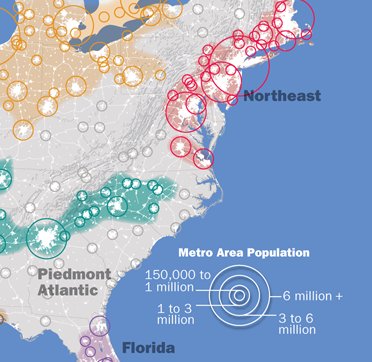 That map says a lot, including why we like it here so much in Raleigh, not only are we part of one of those mega regions, but are also rapidly growing, as the Piedmont Atlantic mega region moves to connect up with the BosWash, creating William Gibson's BAMA (Boston-Atlanta Metropolitan Axis).

Bruce Sterling has been painting a picture of a dwindling role for the nation-state for a long time, and maybe mega regions are the next step:

In my futurist book TOMORROW NOW I was speculating that there might be a post-national global new order arising in cities. Cities as laboratories of the post-Westphalian order.

Now old structures never go away, they just get built upon, so I'm not like some people who expect the USA as an entity to evaporate or collapse, but instead a new layer will be formed above states, but below the federal government. I'd expect states in a mega region to start voting as a block on major issues, more interstate compacts forming, etc. You can already see the shadow of those mega regions in the results of the 2008 presidential election. One of the first steps in that transition will be psychological, as people start identifying themselves as members of a mega region. "BosWash" is a good start, and seeing the mega regions called out in the America 2050 report is another step in that direction.