Subtitle if this were an academic paper, which it’s not: A k-means clustering derived point statistic highly correlated with regressions in commit-series data with applications to automatic anomaly detection in large sets of benchmark results.

Below is the description of how we detect performance regression for the Skia graphics library. I’m writing this up because after much searching I haven’t found anyone describe the method we came up with for detecting performance regressions and maybe this writeup will be useful to other people.

Skia is an open source cross platform 2D graphics library. In Skia, like many other software projects, we have large number of performance tests, aka benchmarks, and we run those benchmarks every time we change the code. Just having a large number of benchmarks isn’t a problem, but being cross platform means running those tests across many different platforms; Linux, Mac, Windows, Android, ChromeOS, on different GPUs, etc. which leads to a combinatorial explosion in benchmark results. For every commit to Skia today the testing infrastructure generates approximately 40,000 benchmark measurements. That number of results tends to change frequently as tests, platforms, and configurations are added and removed regularly. The number of results has been over 70,000 per commit in the past several months.

To make the following discussion easier let’s define some terms.

Trace
A Trace is single benchmark and configuration tracked over a series of commits. Note that this isn’t exactly a time series since the measurements aren’t taken at equidistant times, but are spaced by commits to the codebase. Also note that for each benchmark there may be multiple traces, for example, one for Windows 8, one for Linux, and one for Android.

Regression
A “performance regression” is a significant change in either direction of a metric. Now a metric that drops may actually be a good performance increase, but could also be an indication of a test that is broken, or has stopped working entirely. So regardless of the benchmark, we are looking for step-like changes in either direction.

The issue with tens of thousands of traces is that you just can’t look at the raw numbers, or even plot all the data, and figure out when you’ve had a regression. At first we tried setting performance ranges for each trace, i.e. an upper and lower bound for each trace. If a later commit caused the benchmark results to move outside those bounds then that would trigger an error. There are many drawbacks to monitoring benchmarks by manually placing bounds on each trace:

Even if you automate the placing of trace bounds, you still have the issue of transient behavior that looks like a regression, and you also have to take pains that the automatic calculation of trace bounds doesn’t mask a true regression.

Fig 2- Is this a regression or an anomaly?

So we needed a better system than setting trace bounds. The next section explains the system we implemented and have successfully run for several months now.

Before we go further let’s define a few more terms.

From there we calculate the Regression Factor:

A smaller Fit values gives you a larger R, which means that the more a centroid looks like step function the larger R gets. Similarly the larger Step gets the larger R gets, which is a measure of how big of a change the centroid represents.

Putting it all together.

So finally, with all the preliminaries set up, we can get to the core of the system.

Here’s a view of the system at work, finding regressions in performance. Note that out of 40,000 benchmarks the first cluster contains 1336 traces and has a Regression Factor of -4.08e+3. 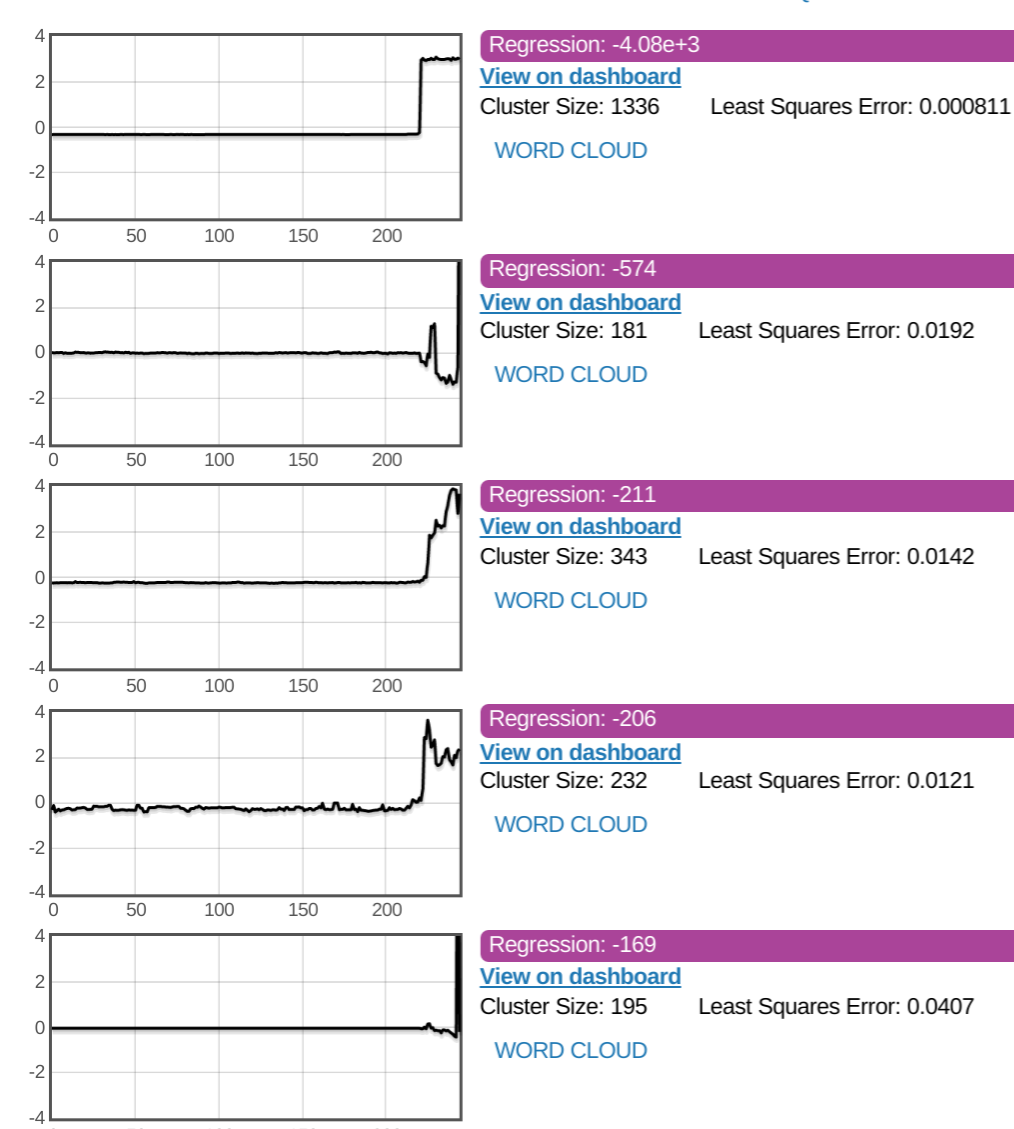 The above system works for finding regressions once. But what happens if you want to check for regressions continuously as new commits land and new benchmark results arrive? One last definition:

Interesting
A cluster is considered interesting if it’s Regression Factor is over 150. This is only a rule of thumb based on observing the system and may be relevant only to the Skia benchmarks, while a different cutoff may be appropriate for other datasets. The important point in that as |R| grows so does the likelihood of that cluster being a regression.

Cluster coalescing currently works by looking at all the new interesting clusters and if they have the same traces as the 20 best traces in an existing cluster then they are considered the same cluster. Note that ‘best’ means the 20 traces that are closest to the centroid of a cluster. Note that this is an area of active work and we are still experimenting regularly with new cluster coalescing schemes.

I hope that was useful. Please shoot me any questions on Twitter @bitworking. The code for the software that does the above analysis, and much more, is open sourced here.