I talked about Google for the desktop back in May, and now it's arrived. Google Desktop is a desktop search application the seamlessly integrates into your everyday Google searches. It is part seach engine, part indexer, and part web proxy (that's how they interject your local search results into your web search results). This is just like WinFS.

Except that it is shipping today.

And it just works.

And it doesn't require an upgrade to your operating system.

And it doesn't require you to manually tag all your files with meta-data.

And it works outside your "Documents and Settings" folder. 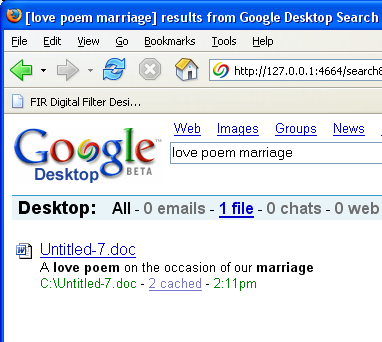 I kind of agree with you, Dare. Saying GDS is like WinFS is oversimplificating WinFS, since WinFS is not just about indexing and search, but also about normalization and sharing of data.

But from a user's perspective, GDS is almost like WinFS. And the fact that GDS is here today and WinFS won't be here for three years or so, makes GDS much more relevant. Besides, what do we know about GDS' development three years from now?

But from a user's perspective, GDS is almost like WinFS.

It isn't. I find it amazing that given WinFS hasn't even shipped in a beta version people claim to know what it was meant to do or how users are expected to interact with it.

If you want to see what WinFS is like or is supposed to be like to end users, use iTunes. GDS is just full-text search which despite the Google brand is something lots of people know how to do on the desktop and is not at all revolutionary given how many implementations of it already exist for Windows. Lookout, X1, etc are already providing what GDS does for Windows today without forcing me to run a local web server.

Dare,
Now I have to wait until WinFS ships before I am allowed to have an opinion of it? And here I thought I could rely on all this documentation:

Which amusingly comes with this disclaimer:

"In spite of what may be stated in this content, WinFS is not a feature that will come with the Longhorn Operating System. However, WinFS will be available on the Windows platform at some future date, which is why this content continues to be provided for your information."

Joe,
You can have whatever opinions you want. Having an opinion and making  accurate statements that match the facts are two different things as your blog post shows.

I find it amazing that given WinFS hasn't even shipped in a beta version people claim to know what it was meant to do or how users are expected to interact with it.

Unless you're on the WinFS team, this is a self-defeating statement. Here's a breakdown of what I'm reading from you:

3) I claim that WinFS is nothing at all like GDS

Or are you privy to insider information that the rest of us are not?

Chuck,
I work at Microsoft on the same floor as a majority of the WinFS team and in fact the WinFS API team is made up from people who were carved off from our team a number of months ago.

However you don't need any sort of inside track to tell that GDS and WinFS are as different as night and day. The link Joe provided to http://msdn.microsoft.com/data/winfs/ contains enough information to make this self explanatory.